FT's Robert Armstrong написа:The other aspect of the bad results was higher expenses, mostly associated with investment in the metaverse. I don’t know if cash dumped into the metaverse (“an immersive, embodied internet that enables better digital social experiences”) will generate strong long-term returns, and neither do you. It is a highly speculative aspect of Facebook’s business, and should be valued accordingly. It has some option value, but the more pressing question for investors is how Facebook’s core advertising business will do in the coming years.

FT написа:Second, Facebook does not trade that much cheaper than Google (yes, I’m boycotting “Alphabet” too). So why not just buy Google? It faces less competition than Facebook and does not have Facebook’s toxic brand problem. The best reason not to own Facebook might be owning Google instead.

Barron's написа:As Bauch saw it, PayPal wasn’t keeping up with overall growth in e-commerce, implying the company would have to gain market share in new areas like physical point-of-sales payments or turning its app into a mobile bank account. Some of that is happening now, but the proliferation of online checkout options ramped up competition, coinciding with tailwinds from the pandemic winding down.

“The space is getting increasingly crowded and PayPal will have a hard time to maintaining or growing its market share,” Bauch said in an interview with Barron’s on Wednesday. “Ultimately, I came to the conclusion that the guidance wasn’t realistic.”

Bauch cut his target on the stock from $160 to $125 after the latest earnings and maintained his Underperform rating.

FT написа:“If you can’t beat them — join them”, appears to be Mastercard’s strategy when it comes to BNPL.

The 55-year-old company is synonymous with credit cards, but its business is best described as the plumbing that supports much of the global payments system. Now, Mastercard is building out infrastructure that enables incumbent lenders to offer BNPL services — a payment model that offers interest-free credit for online purchases and debt is paid off in short-term instalments.

The new programme, Mastercard Installments, will be offered in the US, Australia and the UK from next year. So far, the payments giant has signed up as partners some of the largest names in US store-based credit card space including Synchrony and Barclays US. Mastercard is also partnering with fintechs like SoFi, which is looking to build out its own super app.

volaswap написа:Follow this guy: that how I came with APPS

Me too, via other opinions though...but u were the first
like it
and still very cheap

for sure very volatile as well

Follow this guy: that how I came with APPS


Digital Turbine (APPS) – In 2021, digital advertising company Digital Turbine completed 3 acquisitions that allow them
to control the mobile advertising process from end to end. The company enjoys technology advantages by being preinstalled on devices, as well as first-party data advantages from their carrier partnerships. At their most recent analyst day,
Digital Turbine laid out a path to quadrupling revenues and growing EBITDA by 10X in the next three to five years. Given
today’s starting multiple of less than 8X this year’s expected gross profits, anything approximating achieving their “plan”
should yield very attractive returns over time.
Reasons for optimism include the fact that their software is currently installed on less than 20% of mobile phones, providing
a notable growth opportunity for existing technology without additional capital spending. The company also has
opportunities to increase the number of carriers and phone manufacturers that they work with, as well as the number of
services each carrier purchases.
Digital Turbine also has a massive opportunity with their SingleTap technology, which dramatically improves the likelihood
that an app is installed when a user clicks on its SingleTap-enabled ad. SingleTap has grown to a $100M+ business with
just 15 customers. At their analyst day, Digital Turbine’s Chief Revenue Officer charted the path to “…really accelerate
this into a $1 billion-plus business over the next few years.” In his words, “[t]he way we see this is a very relatively moderate
growth from 15 advertisers to 150, which, by the way, represents only a subset of our total advertiser customers today at
Digital Turbine.” The current run rate revenues for the entire company are $1.2B per year, so growing SingleTap to $1B in
revenue itself would nearly double company revenue overall. This doubling only requires blocking and tackling on an
existing product with a very high value proposition to a subset of customers; it does not require a moonshot invention. The
SingleTap technology could also be licensed to other platforms such as Snap and Meta (Facebook). At an investor
conference in December, management tried to highlight their announcement that Facebook was live-testing SingleTap,
which could be a very big deal since Facebook is the second largest distributor of Android apps (Digital Turbine’s priority).
The market yawned, and the shares ended down.
The market was also indifferent to the positive announcement of two new partnerships with Asian hardware manufacturers
OPPO and Vivo. While these names are not familiar to most Western investors, they do represent 20% of the worldwide

smart phone market (link – note: you will need to create a free Statista account to view the table). They are mostly Chinafocused, so monetization will be lower, but it is another step forward in terms of growing the footprint of software on
phones.
Digital Turbine has a history of aggressively growing revenue and earnings and has secular tailwinds, technical advantages,
and data advantages. Shares currently trade for less than 8X this year’s gross profit. Yes, inflation may raise its head, interest
rates may climb up, and multiples may compress, but just as the sun rises every day, people want their cell phones and
advertisers want to reach them. I believe that the number of devices Digital Turbine software will be installed on will be
higher, price per app install will be higher, revenue will be higher, earnings will be higher, and, ultimately, the share price
will be higher. Over time, I expect that the multiple finishes compressing and the health of the company will be rewarded.

Barrons написа:One perceived threat to Visa and Mastercard is the growth of buy-now, pay-later loans that have been popularized by Affirm Holdings (AFRM) and other companies.

Prabhu says Visa isn’t concerned about the trend. “We are completely agonistic. We are perfectly happy if BNPL becomes a big business,” he says, adding that BNPL consumers often make payments on their loans using Visa “credentials,” including traditional debit and credit cards and Visa-enabled digital wallets. Visa has more than 3.8 billion credentials worldwide, up 10% in the past year

Barron's написа:“The tractor revolutionizes how critical jobs (tilling, planting, harvesting) will be done, rendering prior modes of farming obsolete and setting up a multi-year fleet upgrade cycle,” added Dobre. “Deere is uniquely positioned given the robustness of its solution, while evolving its business model towards a subscription (autonomy as a service) model.” He believes Deere can sell self-driving features on subscription, just like Tesla(TSLA) is trying to do with its driver-assistance features it calls Full Self Driving, or FSD.

Making a self-driving tractor appears to be a little easier than making a fully self driving car. The tractor will only drive itself in a pre-defined area, such as a farmer’s field. It won’t wander down a highway. Speeds are slower, and when obstacles are detected, the tractor communicates with a Deere operations center and the farmer to help deal with obstacle avoidance.

North America revenue came in at $4.48 billion, representing a 12% growth year-over-year and exceeding estimates of $4.18 billion. Net income was $1.3 billion, up 7% from the previous year's Q2.

"NIKE's strong results this quarter provide further proof that our strategy is working, as we execute through a dynamic environment," said Nike President and CEO John Donahoe, in press release. "We are now in a much stronger competitive position today than we were 18 months ago."

Goldman Sachs initiates coverage of CVS, UnitedHealth and Anthem as buy
Beginning its coverage of CVS, UnitedHealth and Anthem, Goldman said that the set-up is attractive for managed care in 2022.
“We have a positive outlook for the sector and see potential for 13% annual EPS growth for the large-cap MCOs over the next two years (’22-’23), more than double S&P EPS growth of 6%. The growing momentum behind value-based care (VBC) and efforts to diversify into provider services position the MCOs well to begin to bend the medical cost curve and capitalize on new profit streams.”

Barron's написа:A key part of IBM ’s turnaround story was written in early November: packaging the company’s low-margin, negative-growth information-technology services business, giving it a cool-sounding name, and getting it off the income statement.

Barron's написа:An earnings forecast is trickier, but Wall Street has been expecting 2021 earnings of $10.05 per share, not adjusted for the spinoff. Given that Kyndryl’s contribution to IBM earnings were close to zero this year, let’s assume the stand-alone IBM earns $10 per share. That gives it a price/earnings ratio around 11, or about a half of the S&P 500’s current multiple. The last time IBM was in growth mode, a decade ago, its multiple was in line with the S&P’s.

Barron's написа:Part of the logic behind the spinout is to turn IBM into a growth story again. As part of that process, the company is making a big push to build up its cloud business, and on that score, it is showing some progress. The company said total cloud revenue over the last 12 months was $27.8 billion, up 14%.

IBM said revenue from its Global Business Services unit in the latest quarter was $4.4 billion, up 11.6%, and slightly above the Street consensus for $4.3 billion, driven by 17% growth in consulting and 19% growth in its business process outsourcing operation. 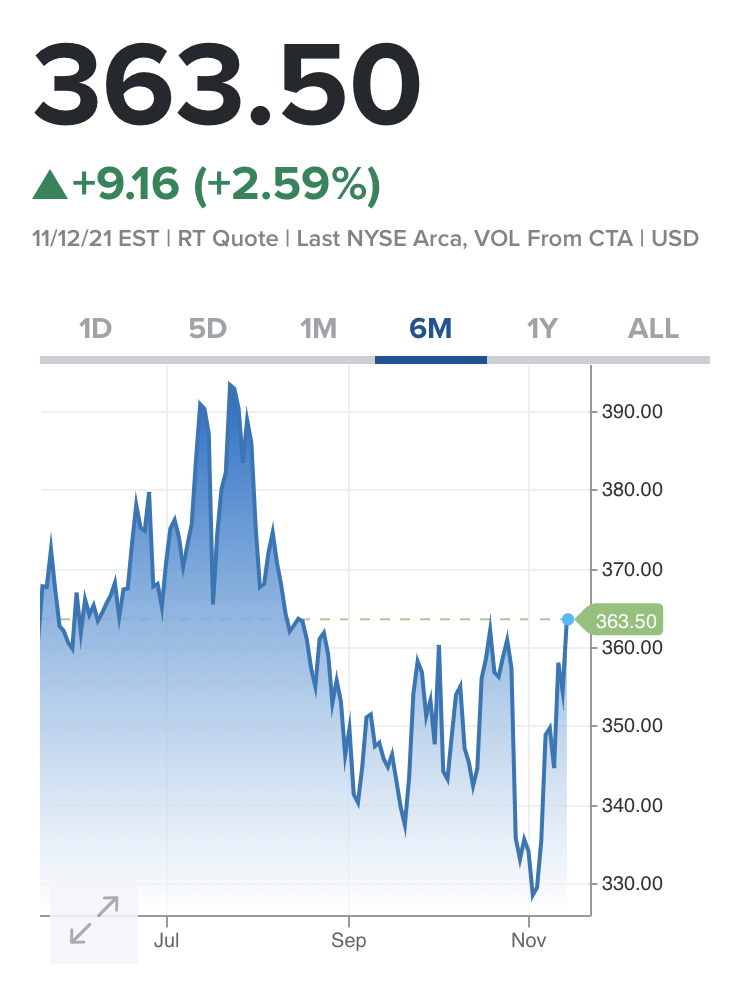