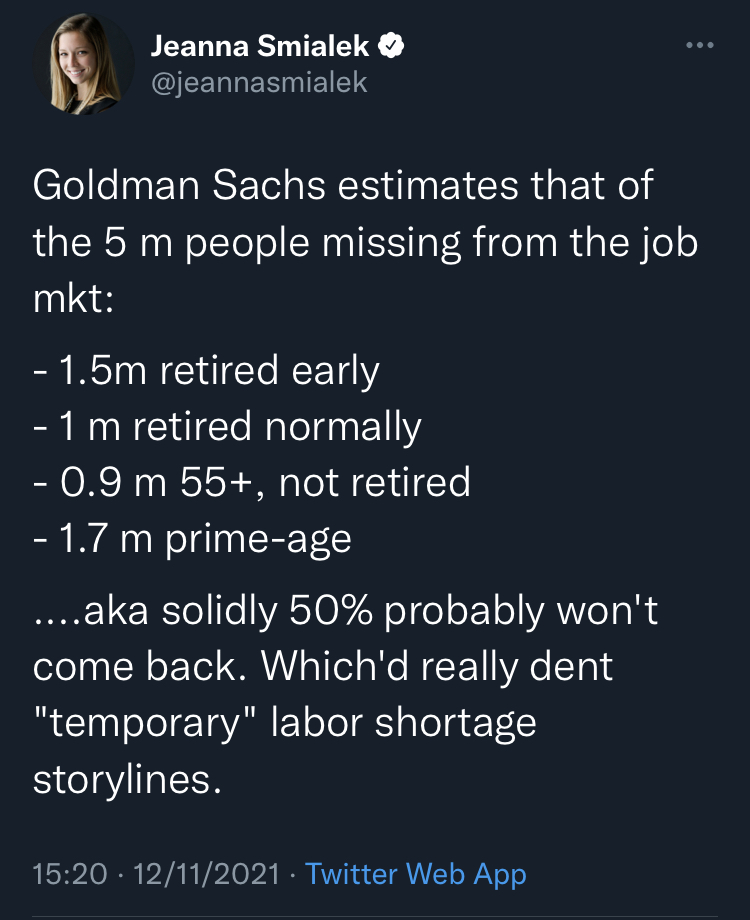 Clark's final message to investors is below:

The fund lost 5.30% this month, mainly from the short book.

After a couple of years of turbulent markets and the increasing influence of politics rather than economics on the markets, I have come to the decision that the best way forward is for the Fund Directors to wind up the fund and return capital.

The success I enjoyed from 2011 through to beginning of 2016 largely stemmed from asking the question that no one seemed to ask – why does the Yen and Japanese Government Bonds rally whenever there is a crisis? The obvious answer was capital flows from Japan would create a bull market in the area they flowed to, and then when the Japanese pulled capital back, it would create a bear market, often with significant currency volatility. Armed with that observation, and combined with analysis of the commodity markets, we build a portfolio that was largely short emerging market and long bonds.

Since 2016, using the same analysis as above, Japanese capital flows have almost exclusively been to the US, and are an order of magnitude larger than anything seen before. And yet, US equities still power ahead, Yen remains weak, and currency volatility has been consigned to the history books. Of course, I asked myself why this is. Why did a model that worked so well, for the best part of 25 years, stop working?

The obvious answer is that central banks led Quantitative Easing (QE). But that answer alone seems insufficient to me. Japan has had low interest rates for years and was still racked by bouts of extreme equity and currency volatility. The other problem with that answer is that the big inflation spike seen this year should then lead to greater volatility in equities, especially as central banks dial back QE programs.

The answer for me comes from China. China wants a strong currency, and to keep consumption strong. It seems to me that the Chinese government uses it extraordinary control of the economy to control activity and the currency through the commodity markets. To elaborate, I expected China to post a weak trade surplus in October, and for currency devaluation fears to spike (particularly after the recent Evergrande selloff). Chinese trade surplus was actually very strong. And it was strong because Chinese imports of oil and iron ore were down significantly. Chinese steel production was down a stunning 20% year on year, a number you would typically only see in a bad recession.

China has effectively taken control of key commodities, and now adjusts volumes to suit its own needs. Taking all this volatility through physical markets, has essentially collapsed financial market volatility, and also led to commodity currencies being significantly weaker than commodity prices – which has been a problem for me this year.

Now I understand this, non-obvious trades at the beginning of the year such as long oil, short iron ore now seem obvious. The surprising weakness of gold and other precious metals can make sense in this analysis. It also explains why the extraordinary fiscal and monetary policies of the US have not been met with greater commodity or bond turbulence. It is very hard for me to get bearish US treasuries when I see Chinese steel production down 20% year on year.

The big question then is whether this Chinese policy of absorbing financial risk in the physical economy sustainable? History suggests not, as most countries prefer to devalue than slow economic growth. However, I can see reasons why China may continue with this policy. The most powerful is that with US policymakers seemingly unable to raise interest rates, or balance budgets there is a gap in the market for a credible currency. Is China making a play for reserve currency status?

Give me an economic problem, then I can properly gauge risk. Give me a Chinese political problem – I am taking a guess as much as the next person. Did I think Alibaba was going to fall 50% this year? No, not until the Chinese government told me to think that way. Is Alibaba a good short now? I have no idea, and like everyone else will have to wait to see what the Chinese government says.

So, I think it time to step back, have a think about where we are going, and then come back when I can see an opportunity for my skill set. Perhaps that’s never, but I doubt it. The only constant in life is change. This will be my final newsletter and it just leaves me to thank you for your support and wish you all the success in the future. From a personal perspective I plan to keep producing research, so keep an eye out for my future notes. Russell. 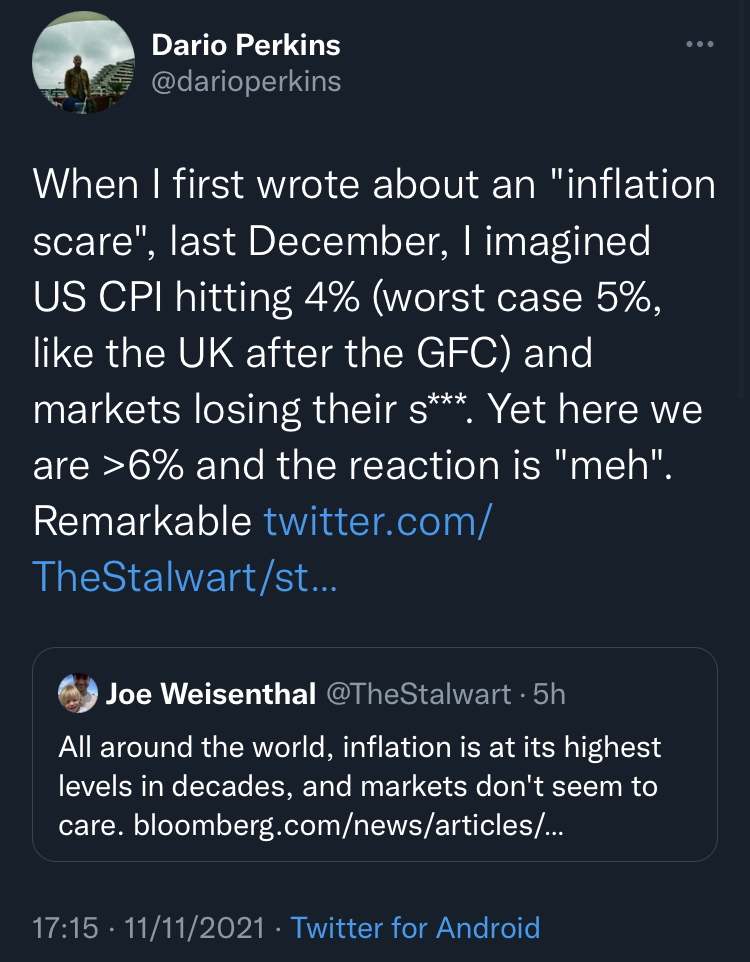 Inflation getting worse before it gets better… 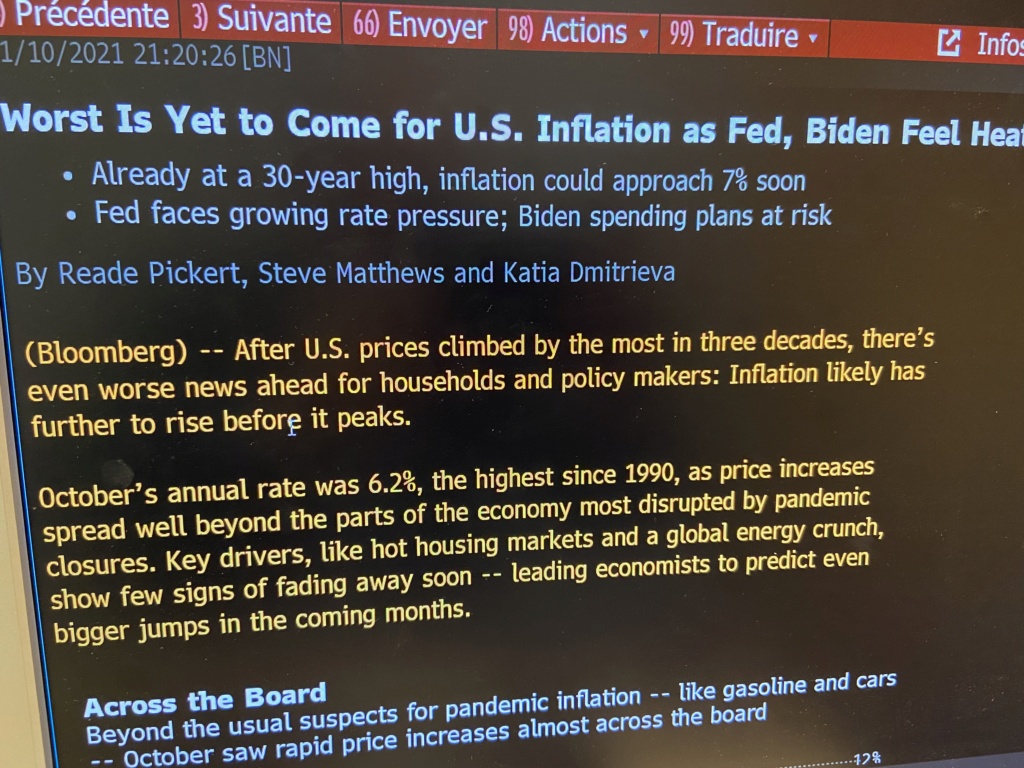 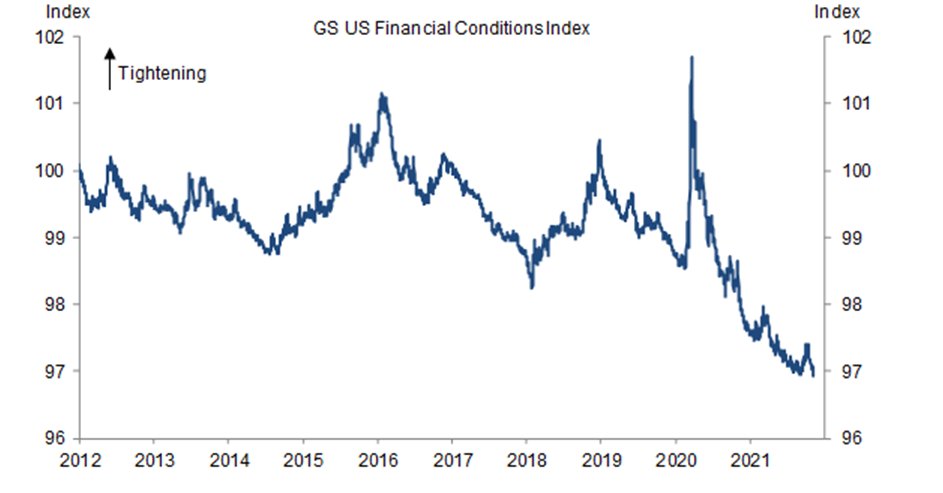 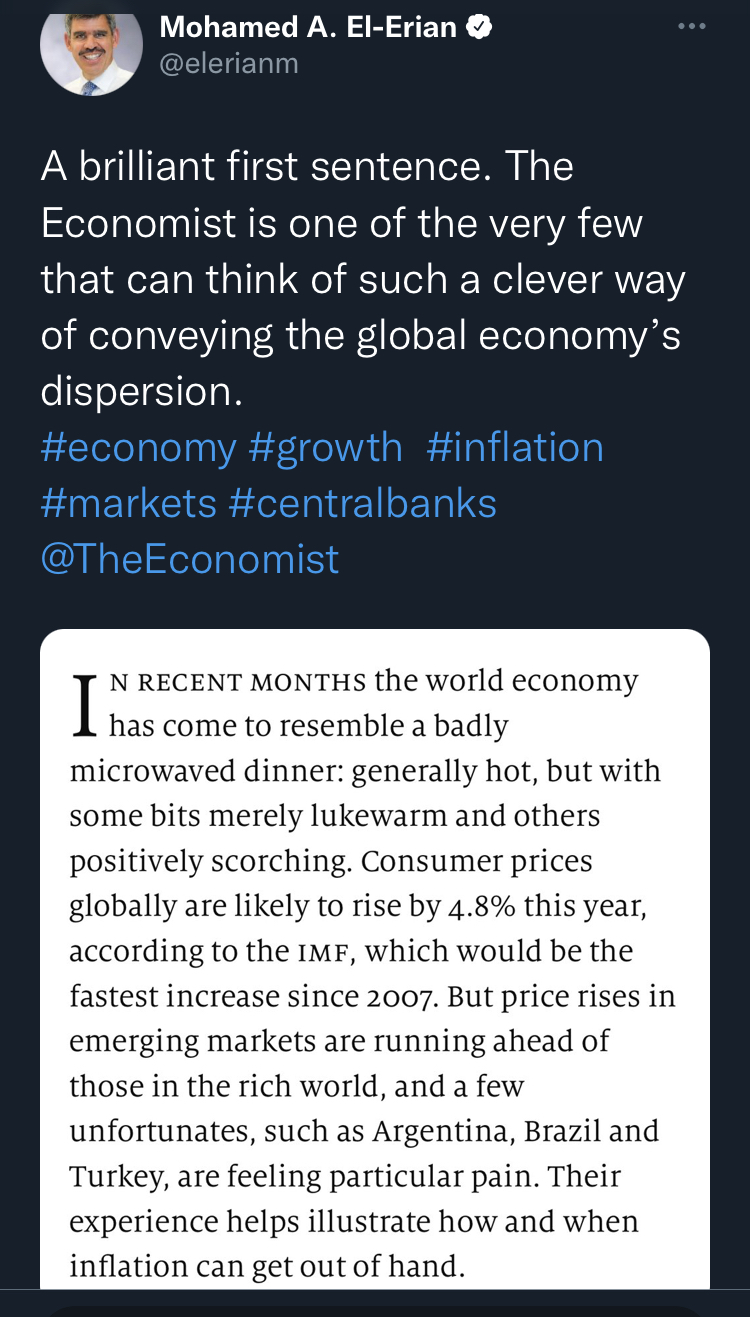 Bloomberg написа:China’s inflation risks are building while new Covid-19 outbreaks are dimming the outlook for economic growth, throwing the spotlight back on policy makers as the Communist Party’s top leaders gather for a crucial political meeting this week.

Inflation data Wednesday is set to show another surge in factory-gate prices to a fresh 26-year high and a pick-up in costs for consumers. More companies are starting to pass on higher raw-material costs to customers, while vegetable prices have recently spiked because of bad weather.

FT написа:Evidence that the US economy is pulling itself out of the pandemic-induced downturn further bolstered sentiment, with the latest jobs report showing a pick-up in job growth across nearly all sectors after several months of more lacklustre gains. More than 500,000 new positions were created in October, and the unemployment rate fell to 4.6 per cent in a move that exceeded economists’ expectations.

We are on the train to normal,” said Kristina Hooper, chief global market strategist at Invesco. “We are not quite there yet but we are certainly moving in the right direction. Growth is re-accelerating and it’s helped by the new developments in Covid treatment.”

FT Editorial Board написа:
Investors have periodically asked how interest can possibly go lower, only for rates to plumb new depths. Yet this time the multi-decade investment trend may really, finally, be coming to an end. Despite a small rally, this week could mark the end of the bond bull run as central banks begin the long, slow tightening cycle and the long-awaited “normalisation” of monetary policy. If it does not, then policymakers have even more reason to worry as it would probably indicate that the rich world is stuck with low inflation and low growth.

FT Editorial Board написа:Traders and central bankers alike are understandably cautious that the more fundamental trends behind the slowdown have not gone away, whether technological change, globalisation or the ageing of western societies. But that is an argument for long-term rates to stay relatively low, even in more normal times, and not for them to fall further: none of these factors became any more deflationary during the pandemic. In fact, China’s changing role in the global economy is potentially reducing one source of disinflationary pressure. Overall, the bull case for bonds, now, is the bear case for the rest of the world — this week’s shifts in monetary policy reflect a relatively robust recovery from the pandemic.

NYT написа:The shock waves from the semiconductor crisis, which is forcing virtually all carmakers to eliminate shifts or temporarily shut down assembly lines, could be strong enough to push some countries into recession. In Japan, home of Toyota and Nissan, parts shortages caused exports to fall by 46 percent in September compared with a year earlier — a potent demonstration of the car industry’s importance to the economy.

NYT написа:For every car or truck that does not roll off an assembly line in Detroit, Stuttgart or Shanghai, jobs are in jeopardy. They may be miners digging ore for steel in Finland, workers molding tires in Thailand, or Volkswagen employees in Slovakia installing instrument panels in sport utility vehicles. Their livelihoods are at the mercy of supply shortages and shipping chokeholds that are forcing factories to curtail production.

The auto industry accounts for about 3 percent of global economic output, and in carmaking countries like Germany, Mexico, Japan or South Korea, or states like Michigan, the percentage is much higher. A slowdown in automaking can leave scars that take years to recover from.

In a report to clients late Friday, economists led by Jan Hatzius said the Fed will raise its benchmark from a range of zero to 0.25% soon after it stops tapering its massive asset-purchase program.

The Goldman economists said the main reason for their new forecast was they now expect inflation to prove more stubborn than they previously thought. They now expect consumer price inflation outside of food and energy costs to still be above 4% when the taper ends.

“We think this will make a seamless move from tapering to rate hikes the path of least resistance,” they said in the report.

Gross domestic product increased at a 2.0% annualized rate last quarter, the Commerce Department said in its advance GDP estimate on Thursday. That was slowest since the second quarter of 2020, when the economy suffered a historic contraction in the wake of stringent mandatory measures to contain the first wave of coronavirus cases.